Ty Boomershine (director Dance On Ensemble Berlin, Lucinda Childs Dance, New York) will lead a workshop is framed by the structure of the Cunningham technique as well as incorporating elements from the many choreographers he has worked with.  This allows for an engaged neutrality that is useful to navigate through various approaches to movement. His class focuses on rhythmic, spatial, and corporeal clarity, encouraging the use of mental as well as physical prowess. Leaving behind the idea of a fixed front, the class explores the use of all spatial directions and works with using the center as a generator for movement.   Freeing the limbs to work independently, while combining this with a sense of coordination and multi-tasking throughout the body.

This talk forms part of Dancer from the Dance: Festival of Irish Choreography, a new festival happening in New York’s 92nd Street Y and in Dublin at Project Arts Centre and Dance Ireland, curated by John Scott, Artistic Director of Irish Modern Dance Theatre. The festival focuses on Irish choreographers, both from Ireland and from the US, representing a wide perspective on modern Irish identity and varying influences on Irish dance, from traditional to contemporary. 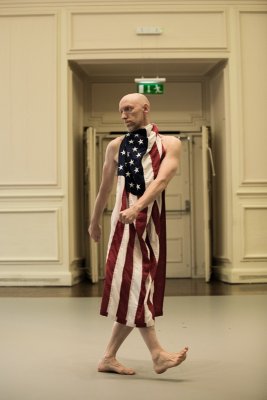 Ty Boomershine, born in the USA in 1968, studied dance at the Fort Hayes School for the Performing Arts in Columbus, Ohio, completing his studies with a Bachelor of Fine Arts at Stephens College in Columbia, Missouri. In addition to dancing with various companies (including the Lucinda Childs Dance Company, Emio Greco | PC, the Merce Cunningham Repertory Emsemble, the Bill T. Jones/Arnie Zane Dance Company, Leine Roebana Dance, Dance Works Rotterdam and ICKamsterdam), he has also performed in various works by individual choreographers, e.g. Dan Wagoner, Gus Solomons Jr., Ton Simons and Giulia Mureddu. He was involved – as rehearsal manager and dancer – in the Field Dances in Robert Wilson’s opera Einstein on the Beach. Since 2007, he has been Artistic Assistant for Lucinda Childs. He was also tour manager for Pere Faura and Nicole Beutler.

He has been presenting his own choreographic works since 1993, at Movement Research and at Danspace Project in New York, as well as at OT301 and the Holland Festival in Amsterdam. At ICKamsterdam, he undertook curatorial and organisational tasks as well as rehearsal management for Emio Greco, Pieter Scholten and guest companies.

He taught the technique he learned with Merce Cunningham at various companies, including Dansgroep Amsterdam, Dance Works Rotterdam, Emio Greco | PC, Krisztina de Chatel, Kamea Dance Company and Lucinda Childs Dance as well as at different international academies and universities, and festivals. He has given workshops and master classes at the Lucinda Childs Dance Company and Emio Greco | PC.

Ty Boomershine has been a member of the Dance On Ensemble since 2015 and is its Artistic Director since 2019.