During her residency at Dance House, Emily Aoibheann will be joined by a group of aerialists and dancers selected through an open call, to explore a new methodology for aerial movement and performance. Emily’s current research draws on diverse practices including aerial, parkour, contemporary dance, martial arts, anatomy, architecture, astrology, astronomy, industrial technology, fabrication, music and text.

This will be the first public presentation following a prolonged research period, which has included film documentation, writing and workshops in Dublin, Berlin and Barcelona. The written part of the work is being compiled for future publication.

This project is made possible through funding by the Arts Council Circus Project Award.

For more on the Dance Ireland residency, and how to apply, see here. 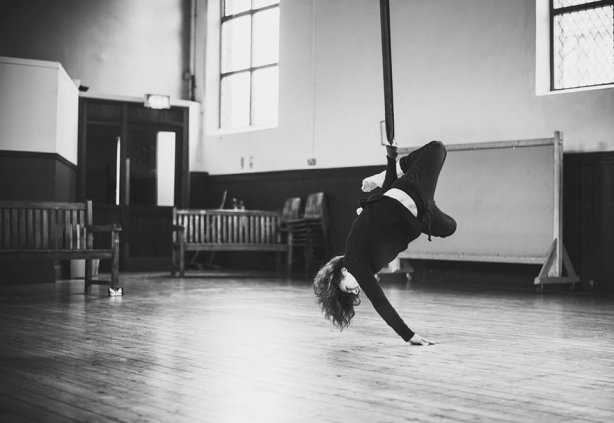 Emily Aoibheann is an aerialist and artist from Dublin, Ireland. She began her aerial career in 2010 as co-founder and director of PaperDolls Performance Company. Drawing inspiration from a background in music and underground performance, resourcefulness, collaboration, conceptual and interdisciplinary elements resonate strongly in her work. She currently produces experimental aerial and non-aerial performance and film under the moniker Dying Breeds, and as educator/director of Creation Aerial school.

In 2012, Emily co-designed and directed the award-winning Constellations with PaperDolls. In 2014/ 2015 she received funding from the Arts Council to develop and present Object Piggy, which premiered at Tiger Dublin Fringe, September 2015. Object Piggy won the Judges Choice Award and received nominations for Best Production and Best Design the same year. In 2015, Emily presented work with Papaveraceae, at the Prague Quadrennial of Scenography, Performance Design and Space and subsequently at IMPACT Festival in Macedonia.