Claire is a receipient of a DI residency for 2023.

The focus of her residency is on the research and exploration of a new work interweaving movement and voice.

The threads of inquiry composing Claire’s current creative exploration anchor around a compost of creation, these ingredients include the retelling of the story of Mary Magdalene from a modern feminist perspective, notions of otherness and neurodivergence in modes of expression and communication, a reclaiming of power and identity, alongside streams of ecosomatic relations, and animist sensibilities. These nodes of investigation act as diving off points for a new solo/collaborative performance project. 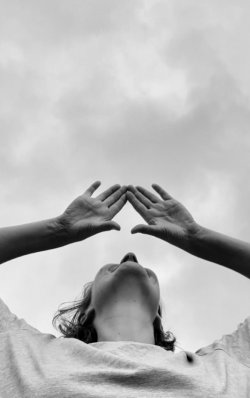 Claire Keating (she/her) is an interdisciplinary dance artist. Her work, while mainly focusing on dance, spans vocal and sonic art, site-specific and performance art. Her current investigations involve expressions of otherness rooted in queerness and neurodivergence. Explorations in an interweaving of voice and movement possibilities that coalesce within a porosity of presence, illuminate her continued curiosity with her craft.

Originally from Limerick, she studied ballet in Perm, Russia, contemporary dance at Rambert, London, and a BSc in Mathematics from UCL. Her interest in art and science crossovers led to performances with Future Physical at ICA, London and subsequently forming the collaborative group ‘New dust’, exploring dance and interactive technology through events at the 291 Gallery, London.

In 2004 she was awarded a grant from Arts Council England to study Butoh with Yumiko Yoshioka in Germany and her work has subsequently been influenced by this technique. She has performed group and solo pieces internationally, including HacB with Ryan Jordan at noise=noise events UK, solo installation performances at Brunnenstrasse gallery in Berlin, Germany, site specific performance ‘in-between’ with Yuko Kominami at Woking Dance Festival, ‘Wardrobe’ Jane Munro at Chisenhale, ‘Frau’ with Carrie Mueller at Nottdance 09, and Zatoichi-e, choreographed by Teo Ghil in Switzerland.

While supported by Daghdha Dance Company in Limerick in 2010, she performed at Gravity and Grace Festival, at Occupy Space, and for ‘Livestock’ at Market Studios Dublin. She formed the collective OIKOS, co-creating a site-specific piece for ‘Home’ festival Cork. She performed in Ruairi Donovan’s ‘Witches’ for Cork Midsummer Festival, had residencies at TDC, in Firkin Crane, and Guesthouse, Cork and solo performance at Joinery Gallery, Dublin while working with sonic artist Dan Guiney.

Invited by Maria Svensson to create a solo for the festival ‘Going Solo Together’ in Kerry 2017, she presented her piece Oscoilt-Scoilt, in response to the Magdalene laundries in Ireland. In 2021 she performed a solo piece, Be(e)have in response to the lockdown, expanding her use of live voice and movement, as part of an installation for Somerset art weeks in Glastonbury, UK. For Culture Night 2022, she performed in Liliane Putod’s ‘Night Shift ’event at IMMA in Dublin. Following this, she performed in an IMMA commissioned short film by the artist Julie Weber.