Get to Know: Lucia Kickham

Dance Ireland Member Lucia Kickham is no stranger to the dance secne in Ireland. She can be seen regularly performing on various platforms and stages by Irish and international audiences. She is a Dublin-based dance artist performing and collaborating internationally since 2011. She has worked with companies and artists which include Liz Roche Company, Philip Connaughton, Junk Ensemble, Jessie Keenan + Tonnta, Maria Nilsson Waller, Mary Wycherly, TRASH(NL), John Jasperse, Laura Murphy, Ciotóg, Catherine Young, Nightstar Dance Company and Oonagh Kearney. 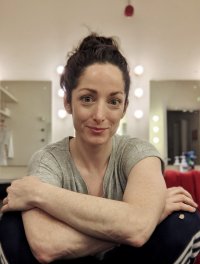 I graduated from Fontys Dance Academy in the Netherlands in 2011. That was the inaugural year of the Step-Up Program which at the time was a partnership between Dance Ireland, Firkin Crane and the Irish World Academy of Music and Dance. I had never expected to return to Ireland immediately after finishing my training and I found myself in a position where I could stay in the Netherlands and do a paid internship with a dance theatre company in Amsterdam or to accept the place I’d been offered on the Step-Up program. I opted for the 6 weeks training in Ireland and I’ve been based here since. I’m really glad I made that decision. It was a great immersion into a professional creative process and a brilliant way to get to know other young dancers returning to Ireland after training. As a graduate program, its objective was bridging the gap between institutional training and the field of professional dance practice. It was a showcase opportunity for new talent. I got my first professional dance project directly from that performance. Nicola Curry of Maiden Voyage Dance Company spoke to me after the showing of the work and that was it, I had my first job! I remember the relief on my parents' faces having witnessed that moment, thinking that maybe they didn’t need to worry about me after all.

When did you first engage with Dance Ireland?

When DanceHouse opened in 2006, I was training in The College of Dance Dublin under the leadership of Joanna Banks. We were invited into the new building for a photoshoot before it opened so that was my first encounter with Dance Ireland. I’m sure there are some cringey images of me doing stag jumps out of the balcony in an archive somewhere! Little did I realise at the time that it would be one of the main places I would rehearse over the coming decade.

As I mentioned, after completing my degree I participated in the Step-Up Dance graduate program. We had a performance of the works by Charles Linehan and Luke Murphy in studio 4 at DanceHouse which was my first time using the studio spaces there. Post-performance Paul Johnson officially welcomed myself and 5 other dancers (Deirdre Griffin, Ryan O’Neill, Karen Gleeson, Róisín Laffanand and Chrisse Adrill) into the professional contemporary dance scene of Ireland.

I became a member the following week and took part in three weeks of Dance Ireland’s Summer Intros training intensive. Clearly I was eager to soak it all up, to keep getting as much training as I could and to get to know what was happening here.

Since then I’ve been afforded numerous opportunities and support from Dance Ireland including a mentored residency award and supported residencies for bursaries, R&D and the creation of On.Pulse. and INIT:The Warm Up Project, the 2018 Hatch award, a place on the Lighting Design for Dance Project as well as teaching opportunities to share Flying Low and floorwork techniques. While DanceHouse has been closed over the past year I’ve availed of many online classes and workshops through the regular morning class program, the Healthier Dancers Days and the Outside-the-studio series. These has been so important in helping me stay connected to my practice and to get something useful out of this period of pause.

After you graduated, how did you maintain your training?
Was this something you just felt was second nature to you to do or did you need to actively seek what you were looking for?

Dance Ireland morning class was a big part of my continued training. I was so used to doing daily class that I didn’t want to let that go. I also really wanted to get to know other dancers in Dublin. It was through morning class that I met Maria Nilsson Waller who I’ve continued to work with on various projects since 2012. Feeling like part of a community felt really important then and still does. It can be isolating to go from having a group of classmates to being an independent freelancer. So, morning class was the only thing I knew at that time that provided that chance for connection. I didn’t really mind what the class was. I was still open to whatever style as long as it felt somewhat disciplined and rigorous. I also took yoga classes and started martial arts training to build a broader base for my movement possibilities. For a long time I’ve had an interest in efficiency so these approaches supported that curiosity.