A little bit about my first two weeks in sunny Spain! (clearly no tan yet).

Working hard at the selfies.

I have been dance artist in residence at NMAC Foundation since the beginning of March. NMAC is situated within a large pine forest on the Andalusian coast, with old bunkers that act as studios, video rooms, and exhibition spaces. It takes approx. 1.5 hours to walk around the sculpture park, which holds permanent works that interact with the natural environment, by renowned international artists including Marina Abramovic and James Turrell. NMAC also provides educational programs about modern art and nature, for schools and the general public. I joined a tour on my first day at NMAC, and was reminded of how mind blowing modern art can be for teenagers! http://fundacionnmac.org/en/

I started my first day at NMAC by practising yoga and meditation outside in the park. I had a few random ‘wants’ bobbing around in my head for my 5 month stint there, including; finally attaining outstanding hip flexibility - this is my time!; reaching a deeper level of connectedness with plants and animals, and using this knowledge to heal myself and the world (as you do); and mostly hoping to find ways of going deeper into my body and out of my thinking mind (which was where the unattainable hip flexibility desire was hanging out).

Plonked on my ‘Just Do it’ or ‘Just Dough it’ yoga mat, as I like to call it, and alternating between eating a sandwich and stretching, my mind was racing with all the possibilities of what I ‘could’ or ‘should’ be doing, instead of noticing where I was. I continued on with my practice and eventually felt present and connected to the environment for some time. I was reminded of the importance of structure and consistency. When this switch happened my body felt clear, and the sense of oneness with the environment brought a simplicity and a small sense of relief. Within this transparency, I then noticed fear and anxiety sitting like a little ball in my stomach. I don’t normally notice emotions so neatly placed and compacted. I wondered if I could find ways to dissolve this energy, and that maybe giving it some love and attention could be enough. I was reminded of something that Eckhart Tolle said about not ignoring feelings, but to stay present with them. (READ MORE HERE)

My dreams are often vivid, and sometimes they offer me some guidance. On the first two nights of my residency the levanter winds were blowing. These are easterly blowing winds in Andalucia, that are thought to affect mind and emotional states, and so I put the intensity of my dreaming down to this. Over these two nights, my dreams were related to my family, death, and grief. The same dreams pretty much repeated themselves on both nights.

Grief took the form of a ghostly woman who waited for me at the door of my childhood home, and whenever I approached her, I lost the ability to speak, my body was drained of energy, and I became powerless. Later, grief revealed itself again in the form of a painful skin rash that was brought on by unexpressed emotions. Before you wonder, I didn’t eat cheese before bed, but a little chocolate was had...

Sitting on my yoga mat at NMAC, I felt a connection between the anxiety and fear sitting in my stomach, and the feeling of grief from my dreams the nights before. I noticed that these emotions were already affecting the creation of my new dance work. I felt stuck, was thinking negatively about my skills, ideas, and body, which had no real basis in reality, but seemed to share similarities with an old and fearful energy. I took all of this as a sign that maybe there is still work for me to do around letting go, and grieving. It’s a pain when you want to feel free, but maybe for now this is the work.

Later I worked in one of the bunkers. I thought about ways to truly engage with the energy of the space in which I was dancing, and how energy can be more clearly seen/ understood/ altered/ recycled. I thought of Deborah Hay’s quote “space is not empty”. I practiced stillness and attempted to notice my body as 99% space. I was also inspired by a quote that I read in Marina Abramovic’s book ‘The Public Body’ (not sure who the quote is by) - “Although space seems empty, once you develop certain energies, you can control it. When that happens, you can look through solid things and walk into empty space as if it were solid” D.L. 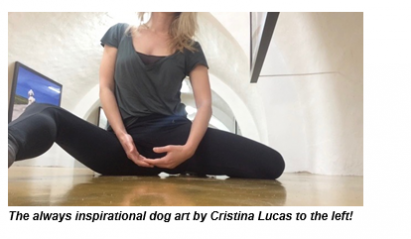 In the evenings more healing was taking place. Willie the cat from my apartment block decided to jump from a third floor window! Luckily, he is healing well and has this wee cast on for ten days. He’s been super cuddly since he came back from the operation, and is now relaxed and getting plenty of love and attention : ) . Send him some good vibes if you feel like it <3 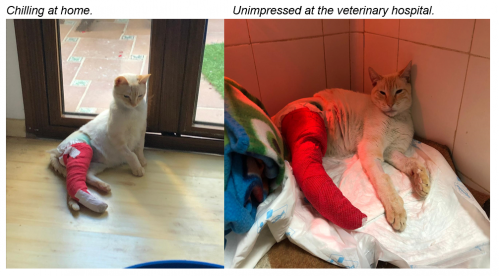 In the next days I went further into the park and picked an open space that was being blasted by the midday sun (tourist behaviour). I planned to practice movement, get a tan, and attempt to befriend the local environment once again. I hung out with the trees, watched insects eating plants, rescued a caterpillar from some ants (maybe wrong but I couldn’t stand by and watch the scene), and was forced to practice stillness whenever a bee landed on me (allergic).

I’m interested to understand more deeply how/why the natural environment positively affects my vibes, and how this can inspire my dance practice. I just need to wear the right clothing!

In the end, the ants had their revenge, and nature did not want to be my friend on that particular day...I can’t really blame it, those shorts were not becoming…

That same afternoon, after getting fairly bored with myself, I sat down and read an article on Facebook about Thich Nhat Hanh returning home to die, in which Phap Dung said “There is dying in the sense of letting this body go, letting go of our feelings, emotions, these things that we call our identity, and practising to let those go. The trouble is we don’t let ourselves die day by day. Instead we carry ideas about each other and ourselves. Sometimes it’s good, but sometimes it’s detrimental to our growth. We brand ourselves and imprison ourselves to an idea. Letting go...can move you towards equanimity, a state of freedom, a form of peace”.

I was inspired to make a list of my core beliefs and thought about how they could maybe support me to go deeper into my creative practice, and to form a clearer structure for it.

I also thought about more emotionally driven ideas that I’ve been committed to over the last 10 years or so, and how these are maybe causing creative blocks and resistance in my practice of art, life and relationship. I don’t really know what to do with that yet!. More letting go and trusting I suppose. Who am I…Who am I…Deeper and deeper I attempt to go, like a big ol’ submarine…I’ll report back.

It ain’t easy, but it feels positive to practice seeing, even the most personally difficult situations that flare up my ego and idea of who I am and what things should be, as potential, along with practicing non-judgement, and non-reaction

I worked with the wondrous Michelle Boulé on a dance film about Lucia Joyce recently, and she inspired me to be more curious about everything, even ideas that seem solid and unchangeable. You can read more about her amazing work here - https://www.michelleboule.com/ 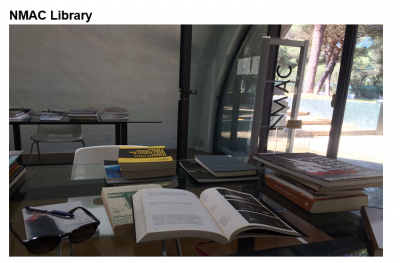 Ant eaten, a little red, and after telling people mistakenly many times that I was “muy caliente” instead of “muy caluroso” (Spanish speakers will know the difference, oops), I’ve moved back indoors. I currently switch between duolingo, a bunker for movement practice, and the wonderful NMAC library, where I’ve been reading up on set design for modern dance, and artists working with natural materials to create live art. Check out these beautiful sets created by Isamu Noguchi for Martha Graham! 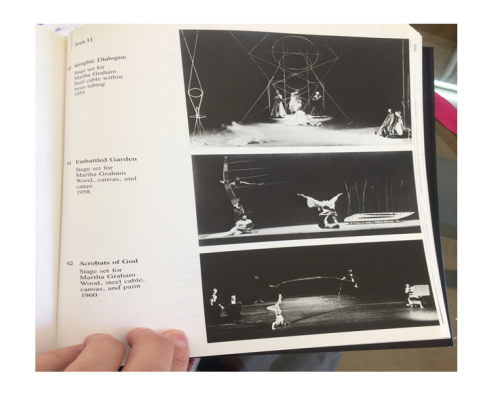