Yasmin Mello is a Dublin based choreographer, director, performer, researcher and a dance and pilates instructor. She has been the recipient of DanceIreland residencies in 2020 and 2021. Yasmin has co-written, directed and choreographed the dance theatre piece “Oi!”, which premiered in February 2019 at the Scene+Heard Festival and which was later adapted to a short film with the support of the LaunchPad Bursary from DanceIreland.

Yasmin Mello is a Dublin based choreographer, director, performer, researcher and a dance and pilates instructor. She started her training from a young age and has always been interested in learning movement from a wide range of perspectives and dance artists having trained with important national and international names including Nora Esteves, Yelle Bittencourt, Alex Neoral, Esther Weitzman, Maria Alice Pope, Tadej Bdrnik, Deborah Colker, among others. Since arriving in Ireland Yasmin has continued to train and improve her skills by engaging with artists like Steve Batts, Sarah Jane Scaife, John Scott, Mihaela Griveva, Amanda Coogan, Loretta Yurick and Robert Connor.

She has a BA in Dance from Angel Vianna Dance College (Br) and has performed with several dance groups in Brazil. She was invited to take part at the Panorama Festival in 2011 with her own work "Gira a Gira '' as part of the Universities Showcase and again in 2014 as part of a Residency with Cena11 Dance Company. In 2015 she started working as Assistant Director and Performer at Portus Dance Company, an independent dance company based in Rio de Janeiro; together they created a collection of short screendances, an itinerant street performance and a stage work called “Palavras”. During that period she discovered her interest in making interdisciplinary work combining dance, theatre and visual arts through intuitive investigation. In 2016 she directed the short screendance “Tempo” which was then selected to be presented as part of the Dança em Foco Festival.

After moving to Dublin in 2016 she worked as a Dance Director mentoring and choreographing a group of young dancers with the Lucan based company Next Level Dance Center and together they received numerous dance awards including the “Outstanding Choreography Award” with the Twilight Festival in 2017.

Yasmin has co-written, directed and choreographed the dance theatre piece “Oi!”, which premiered in February 2019 at the Scene+Heard Festival and was later adapted to a short film with the support of the LaunchPad Bursary from DanceIreland. “Oi!” recently received an honorable mention at the nepalese screendance festival ViDEOSKiN II 2021. Besides that, together with comedy actor and writer Johny Walsh she has developed and facilitated the project “Mobilise” a socially engaged workshop which was awarded the Trinity Equality Fund 2019. Yasmin was awarded her MPhil. In Theatre and Performance with Trinity College Dublin in September 2019 after researching how international performances and cosmopolitanism can be represented within the context of Irish festivals. She also received a scholarship to join the Echo Echo Dance and Movement Festival 2019 and with it came the opportunity to expand her network with international artists being invited by the LUXe Landscape Theatre to perform in Hong Kong in 2020. In July 2020 she spent a week in residency at DanceHouse Dublin working on her new piece “Marbleface” which was later performed as a short film work-in-progress with Imagine Arts Festival 2020. ”Marbleface” was selected to be commissioned for the Imagine Arts Festival 2021 and Yasmin has also been invited to be part of an in-kind Mentorship programme with Steve Batts in preparation for the development of this piece.

In the beginning of 2021 she spent a week in Residency at DanceIreland researching the seeds of a new interdisciplinary and cross-border digital performance called “ECOS '' with her friend and collaborator in Brazil Juliana Tarumoto. 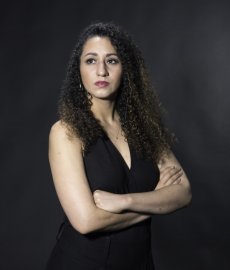