Maria Svensson is a professional contemporary choreographer, producer, performer and teacher. She was an Established Dance Artist Recipient of Dance Ireland's Hatch Award in 2020. 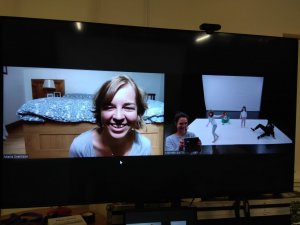 Maria Svensson is a dance artist with a passion for communication and creating a safe space for people from all walks of life to experience the magic that is dance. She does this as a dancer, performer, choreographer, early years artist, teacher and producer.
Maria works mainly with improvisation and an approach called ‘Poetic Movement’ which she has gathered from Echo Echo Dance Theatre Company. ‘Poetic Movement’ takes the perspective that dance has a similar relation to our everyday movement in the same way that the poetic use of language has to our normal, everyday speech. An interest in ‘people not bodies’ and the processes by which we can create and understand meaning is at the core of the practice. Maria uses this approach in all areas of her work.

Since 2016 Maria has been a facilitator of TAP (Teacher/Artist Partnership) supported by The Department of Education & Skills and the Education Support Centres Ireland. Moreover, she has completed a number of TAP residences in Primary Schools since 2015.

During 2016-2018 Maria was the leader of Firkin Crane’s Dance Club for boys ages 8-12 and since 2017 she has taught professional classes at the Firkin Crane and Triskel Arts Centre, Cork. In 2019 Maria had the pleasure to facilitate workshops at KCAT Arts Centre, Kilkenny.

Maria is part of BEAG, under the organising partner Graffiti Theatre Company, working as part of a team of artists creating high quality art experiences for children aged 0-3.

In 2014 Maria founded the solo dance festival Going Solo Together which takes place biannually in her hometown Örebro, Sweden. The festival is inspired by Jeffrey Gormly’s essay ‘Everyone is going solo together’ and brings local, national and international dance artists together to share and celebrate the art of solo dance. In 2017 she used her experience to organise a version of the festival in Dingle Co Kerry in partnership with Nick Bryson of Legitimate Bodies Dance Company. The festival was bilingual (as Gaelige and English) and widely inclusive.

Maria has toured and showed her own work mostly around the isle of Ireland and Sweden. Work includes the solo The Importance of Shepherds (2015) which was performed as part of TOCHT International Dance Festival, Echo Echo Movement & Dance Festival, Quarter Block Party and in venues around Co Kerry. The solo "Dynamic"(2013), choreographed by Deborah Hay with adaptation by Maria was performed at Nya Teatern, An Lab, as part of NEST, Going Solo Together and Féile na Bealtaine. The participatory performance ritual The Power of Frau (2018) made and performed together with Cathy Walsh for Cork Midsummer Festival and Féile na Bealtaine. Maria has also made work for camera, most recently together with filmmaker Mark Mc Loughlin. Mo Spiorad Eilifinte/My Elephant Spirit (2018) was screened at The Phoenix Cinema in Dingle which marked the finish of Maria’s two year residency (2016-2018) at An Lab, Dingle funded by the Arts Council & Kerry County Council. 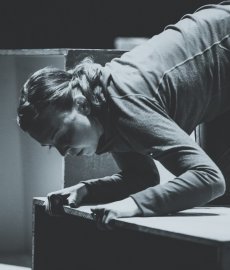