Originally from Cork City, Luke is a performer and choreographer based between Cork, New York and Brussels. Luke is a Dance Ireland HATCH Award recipient for 2021.

Originally from Cork City, Luke is a performer/ writer/ director and choreographer working across various mediums in Europe, the UK and USA. He holds a BFA in Dance from Point Park University (Pittsburgh, USA) and an MA in Choreography from University of Chichester (UK).

Luke has danced with Ultima Vez from 2014-2018 touring internationally in productions of In Spite of Wishing and Wanting, Booty Looting and Spiritual Unity and Punchdrunk since 2009, performing leading roles in the original casts of The Third Day-Autumn (HBO/Sky TV 2020) Sleep No More in Shanghai (‘16-‘18), New York City (’11-‘15) as well as productions of The Drowned Man in London and Sleep No More in Boston. In addition, he has danced in the companies of Martha Clarke, Kate Weare and Pavel Zustiak, and in projects with Liz Roche, Clare Langan, Ben Duke, Alexandra Waierstall, John Kelly, John Scott, Luca Silvestrini, Jonah Bokaer and Bill T Jones/ Arnie Zane Dance Company.

Luke is the director and curator of the Catch8 Workshop Series, he is founding member of Cork Dance Initiative and is currently dance curator at Uillinn West Cork Arts Centre. He is delighted to sit on the board of directors at Firkin Crane, Cork since 2020. 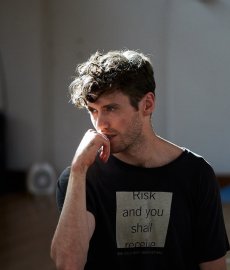