Áine is a Dance Ireland Associate Artist for 2019.

Áine Stapleton works in dance, film and music. She has a 1st Class Honours Degree in Dance Studies from the University of Surrey, London. She has written, directed, produced and performed her own work since 2005 for both national and international presentation.

Áine created feature film Medicated Milk based on Lucia Joyce, daughter of Irish writer James Joyce. Medicated Milk was made in collaboration with José Miguel Jiménez and features an original sound score by Somadrone. It was programmed twice by the Irish Film Institute in Dublin and screened at the 6th International DRFI Conference at NYU Tisch School of Arts in New York.

She is currently working on a second creative project about Lucia with support from the Arts Council of Ireland, Arts and Disability Ireland, Dance Ireland, The James Joyce Centre Dublin, Tanzarchiv Zurich and the Irish Embassy in Bern, Switzerland. 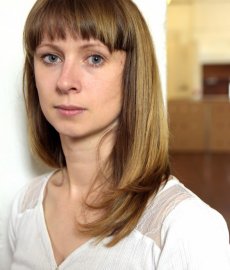