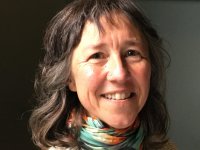 Gwen is a Producer, Consultant and Mentor working across the full breadth of the live performance sector.

After working in the commercial sector in the USA and UK, Gwen moved into arts management. She was Administrative Director for Motionhouse Dance Theatre 1992 - 1997 after which she embarked on a career as an Independent Producer and Consultant working with artists including: Hetain Patel, Russell Maliphant, Carol Brown, Rosemary Butcher, Nigel Charnock and New Art Club as their manager and project and/or tour producer.

Currently Gwen has an ongoing role as Executive Director of Lone Twin for whom she produced The Boat Project, one of the highlights of the 2012 Cultural Olympiad. Since moving to Ireland, in 2018 Gwen has been producing work for a portfolio of Irish artists and companies that includes Pan Pan,  Junk Ensemble, Luke Murphy/Attic Projects, Croi Glan,  One Two One Two and Dylan Tighe.

Alongside ongoing commitments Gwen has produced one-off projects including: Where The Land Meets the Sea, a Big Dance 2006 project performed by a cast of a 100 on Brighton beach; Destino, a co-production between Dance United and Sadler’s Wells for a cross generational cast of 130 performers with live music from the Royal Philharmonic Orchestra; a large-scale dance programme for the Rugby League World Cup 2013 including a performance by a cast of 500 for the Opening Ceremony at Millennium Stadium, Cardiff; and The Alchemy Project - a pioneering Dance and Mental Health intervention produced in collaboration with Dance United Yorkshire and South London and Maudsley NHS Trust in 2015.

To complement her work as a producer Gwen has undertaken consultancy projects for organizations and institutions such as Dance Manchester, Marketing Gloucester, Arts Council England, Arts Council of Wales and South East Dance; Gwen has also  fulfilled advisory strategic and business development briefs for Company Chameleon, Wired Aerial Theatre and Yorke Dance Project; delivered training in arts management; and lectured on cultural policy and management at the Universities of Falmouth, Surrey and Coventry.