Catch8: A festival of workshops focused on training, creativity and sharing, and new opportunities for professional dancers.

All registered students will receive special offers and discounts on performances and events throughout the Cork Midsummer Festival.

The Catch8 Workshop series is an initiative by Attic Projects in collaboration with Cork Midsummer Festival, Cork Arts Office and Dance Ireland.

Earlybird price of €225 available until April 15th / €245 thereafter. Advance booking is essential as capacity is limited.
€40/day [Available after May 15th subject to availability.]

To secure your place, call or email Dance Ireland reception to arrange payment at +35318558800 / info@danceireland.ie.

Please note:
This is an intensive workshop series for professional dancers or students in the advanced stages of professional training.

Kristina Alleyne is Co-Artistic director of Alleyne Dance (AD), which is a unique and powerful company that blends Afro- Caribbean, Hip Hop and Kathak within a contemporary dance context. A Night’s Game is the company’s main production, it has been touring internationally since 2016. AD Workshops has been led internationally in over 18 countries and have received over 10 choreographic commissions.  Kristina worked with the likes of Akram Khan Company, Wim Vandekeybus Ultima Vez Company, Arthur Pita, Retina Dance Company, Henri Oguike to name a few. 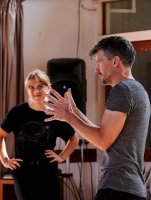 Ben Duke Ben is a choreographer, performer and the Artistic Director of Lost Dog. He trained at Guildford School of Acting, the London Contemporary Dance School and has a ﬁrst class degree in English Literature from Newcastle University.  His work is an attempt to reconcile those three subjects. For Lost Dog Ben has created 10 shows including the critically acclaimed Juliet and Romeo in 2018 and Paradise Lost (lies unopened beside me) in 2015.  Both shows have toured extensively in the UK and in Europe.  In 2011 Lost Dog won the Place Prize for Dance sponsored by Bloomberg with their duet It Needs Horses.  As a freelance choreographer Ben created the Olivier award nominated Goat for Rambert Dance company as well as works for Scottish Dance Theatre (The Life and Times of Girl A), Dance Umbrella (The Difference Engine), Phoenix Dance Theatre (Pave up Paradise), and the contemporary circus company Barely Methodical Troupe (Kin). As a performer he has worked with Punchdrunk (Faust), the Gate Theatre (I am Falling), The National Theatre of Scotland (Dolls), and toured as a guest artist with the Hofesh Shechter company (Political Mother).   Ben is a Work Place artist.

Damien graduated from CNAC (Centre national des arts du cirque /France) where he specialized in partnering, acrobatics and dance. Already during the study he started to develop a very own style between dance and acrobatics. In his work as a teacher Damien conveys the technical know-how as well as how to be sensitive and emotionaly involved when performing.
In his career Damien was part of more than 37 productions. He worked amongst others with Josef NADJ, Helder Seabra, Kitsou DUBOIS, Damien JALET, Alexandra Waierstall.

Since 2006 he has worked extensively with Sidi Larbi Cherkaoui as performer, rehearsal director and assistant choreographer. Damien performed in the award-winning shows “Babel (words)” and “Puz/zle”. Furthermore he was dancing in Myth, Sutra, the movie Anna Karenina and Milonga.

Born in Serbia in 1987, Tamara Gvozdenovic arrived in Switzerland at the age of four and discovered classical dance. After her studies in Neuchâtel, in visual arts, Tamara joined the prestigious TRINITY LABAN theatre dance school in London, where she graduated in 2010. The same year she presented her first creation Sainte Marie Joseph de la Rose at the Théâtre du Pommier in Neuchâtel, as well as a second one the following year, Sous le Cou(p) du Lapin; finally a third play, Light Scream. She will join the famous Belgian dance theatre company Peeping Tom in 2014 in Brussels. Vader (Franck Chartier) and The Land (Gabriela Carrizo) are the two productions in which Tamara will dance before joining Basel choreographer Tabea Martin for Beyond Indifference (2016) Forever (2019) and soon to be created Nothing Left (2020). She choreographically assist Tabea for This is my Last Dance in 2018.
Tamara founded Le Facteur, a dance theatre company formed as a collective of artists, evolving between Switzerland, France and Belgium. Le Facteur has three active productions : Tombés (2017) solo performed by Tamara herself, Tradition Travioli (2018) and Les Dames (2019).
tamaragvozdenovic.com lefacteur.ch

Luke Jessop is the Artistic Director and founder of Ion Tribe, a dance theatre company with a strong focus on improving the scientific literacy of the general public through dance theatre productions, workshops and festivals. Under Ion Tribe, Luke has created a solo-work - 'Letter to my Newborn Child' and is currently touring the duet, 'The Red Queen'. Luke trained in the UK at the University of Bedfordshire, and then went on to work with UK based companies 2Faced Dance, for the triple bill 'In The Dust' and then Southpaw Dance Company for the piece 'Carousel'. In 2012 Luke moved to Brussels to work with Ultima Vez / Wim Vandekeybus, creating and performing in the works; 'booty Looting', 'Talk to the Demon', 'Spiritual Unity', 'FEAR NOT' and 'In Spite of Wishing and Wanting' (Revival). Luke teaches prolifically at festivals and schools throughout Europe with his own style of creative acrobatic dance - Riding The Curve, as well as being commissioned to create works for various schools and institutions. Luke is also the founder and Artistic Director of the ConnectLAB festival. A nine day festival in Brussels, focused on partnering work, bringing together different disciplines of movement.

Emma started creating shows in 2010, following a sabbatical as a ballet dancer. She creates work that often combines dance, live music, theatre and distinct visual universes, but always with dance as it's driving force. In 2015 she formed United Fall. Previous productions include Birdboy (2019) Orfeo ed Euridice (2018), Girl Song (2017), Dancehall ( 2015), Tundra (2014), Dogs (2012), Listowel Syndrome (2010). She was an associate artist with Dance Ireland and Artist in Residence at Visual 2012-2018. Martin was a drummer in the DIY no-wave band You can call me Frances. United Fall is funded by The Arts Council of Ireland.

Luke is Artistic Director of Attic Projects, creating and performing original works across Ireland, UK, Germany and USA since 2012. His work has been widely supported in Ireland and internationally including Arts Council of Ireland Arts Grant funding since 2018. He is the founder and Programming Director of The Catch8 Workshop Series. BFA 2009 Point Park University, MA 2017 University of Chichester.

Occasionally Luke enjoys unpacking his suitcase in his home in Cork.

Sarah was born and raised in Dublin Ireland, and discovered her passion for dance at a young age with Ella Doran and Phil Cole. She trained professionally at Central School of Ballet, London, graduating with a diploma in classical ballet in 2001. From there she worked in France at l’Opera-Theatre de Metz before moving to Saarbrücken Germany where she worked under the direction of Marguerite Donlon. Then in 2004 she successfully auditioned for NDT 2 . She moved up to the main company in 2007 only leaving in 2019. During her time with the company she danced the works of Jiri Kylian, Lightfoot Leon, Naharin, Ek, van Manen, Goecke, Pite as well as many other guest choreographers, dancing both in the creation of new works as well as repertoire. She has also work with film, performing in short film ‘Voices of Finance’ (2015) and feature-length ‘The Beast in the Jungle’ (2019)  both directed by Clara van Gool. Sarah continues exploring her dance, acting, teaching and coaching in the Netherlands where she is based as well as internationally.