Curated by Dance Ireland, we welcome several International Associate Artists to work at DanceHouse each year.

The aim of this curated programme is to enable international dance artists and companies with a connection to Dance Ireland to work for concentrated periods of time in DanceHouse on a self-designed programme of research and development.

See here for full details and biographies of all past International Associate Artists from 2009-2016. 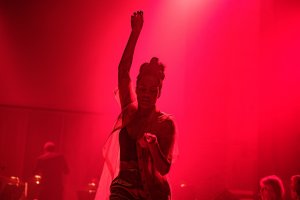 Alexandrina’s work has been pioneering in interdisciplinary practice and pushing the boundaries of the art form.

We look forward to working with Alexandrina and our membership community.

Alexandrina has recently founded her own organisation Yewande 103. Yewande 103 formalises the past 10+ years of Creative Director Alexandrina Hemsley’s work in the contemporary dance field as a choreographer, performer, writer, mentor and educator.

Alexandrina Hemsley’s practice is shaped by the morphing disciplines of dance, dance for camera, live art, theatre, mentoring, creative and critical writing. Driven by an interest in fracturing, connectivity, displacement & emotionality, they hope to find and share ways of expressing felt, lived realities. They work with intricate improvisation scores and vivid performance environments which insist on conjuring embodied enquiries into a multiplicity of voices. This includes work within organisations around anti-racism, anti-ableism and embodied advocacy. It is a life-long, nuanced undertaking. Alexandrina is Associate Artist at Cambridge Junction, Board Member of Chisenhale Dance Space and International Associate Artist 2021 at Dance Ireland.

Shannon, is a Canadian choreographer and dancer and dance educator, based in Berlin, Germany since 2006, received a B.F.A honours/dance at York University, Toronto in 1992. Since 1993 her choreography has been presented in Canada, Europe the in the U.K. She danced with Toronto-based Dancemakers (1994-2006), artistic director Serge Bennathan, which toured extensively nationally and internationally. She has worked with several choreographers including; Benoît Lachambre, Kim Itoh, Peter Chin, Marie-Joseé Chartier, Peggy Baker, and Louise Bedard.

Shannon performed in installation works of Visual artists  and performed in numerous events of performance improvisations with musicians, performers and artists. Her video work has been exhibited in galleries in Toronto and Berlin. Shannon worked as: an Artistic Director for a Canadian Dance collective for 6 years, an artistic advisor, creative facilitator for choreographers and with students of the BA dance program at the University der Kunst (HZT) in Berlin, as well as a choreogrpaher and artistic coach for circus artists. 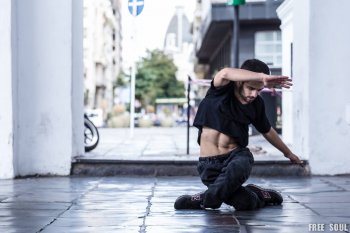 Jesus is an Argentinean Choreographer, Dancer and Teacher. Having trained in Contemporary dance, Contact Improvisation, Hip Hop, Street Dance, Acrobatics, Breakin’, Parkour, Argentinian Folk dancing and Tango, his research has to do with the experimentation of different movement techniques crossing people from various backgrounds to “revolutionize” their own movement.

He is the director and choreographer of the Argentinean dance company “Una constante” (“A constant”), Director of the Intensive Course “E.M.E” in Buenos Aires (“Movement Experimentation”), and he had created and has organized the “Constant” Music and Dance Festival in Argentina since 2014. He teaches in various studios and dance schools, and has taught internationally in Chile and South Africa to different dance companies.

Cristina Planas Leitão holds a BA in Dance Performance from ArtEZ – Hogeschool voor de Kunsten in Arnhem, The Netherlands, graduating in 2006. She has worked extensively with David Zambrano since 2005 as a student. In 2010 she was one of 50 artists chosen to be a part of 50 days of Flying Low and Passing Through in Costa Rica certifying her in both techniques. Since then Cristina has been sharing her knowledge of the work internationally. In 2013 Cristina has performed in the revival of Experience # 1, a piece by Isabelle Schad (DE), at Serralves Contemporary Art Museum, Porto. In 2011/12 she is co-creator & performer of The very delicious piece with Jasmina Krizaj – a piece produced in the frame of the network Modul Dance (EDN) with more than 30 international performances, among other places at Plesni Teater Ljubljana (SI); I like to watch Too, Julidans FestivalAmsterdam (NL); Stara Mestna Elektrarna, Ljubljana (SI); Maribor 2012 European Capital of Culture; Teatro Campo Alegre, Porto (PT); CAAA,Guimarães – European Capital of Culture (PT); Hellerau – Europäisches Zentrum der Künsten, Dresden (DE), The Place, London (UK); etc. With this creation they established a long term collaboration continuing later with the making of The Very Boring Piece. In 2014 she also premiered her own solo bear me, selected for GUIdance Festival 2015 in Centro Cultural Vila Flor, Guimarães and acclaimed by the critic. As a rehearsal director she has worked for Hofesh Shechter’s(2012-2014) and Gregory Maqoma’s (2015) creations for Companhia Instável. Since 2013 she is one of the artistic advisors to Companhia Instável, Porto and an associated artist to their residency program. In 2015 as well she is one of the selected artists to participate in The Porto Sessions  – a project drawn and developed by Meg Stuart/ Damaged Goods and Ana Rocha organized by Mezzannine and co-produced by Rivoli Theater. She produces her own projects independently and is currently developing her new work UM [unimal] with the support of Dance Ireland and other co-producers. 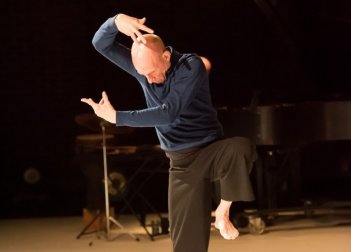 Andrew de Lotbinière Harwood is an internationally recognized leader and guide of contact improvisation. He began his dance career in 1975 and, for over forty years has dedicated himself to the research, education, development and dissemination of contact improvisation and compositional improvisation as sophisticated movement disciplines and performing art forms. He studied and performed with (among many others) Steve Paxton, Nancy Stark Smith and Nita Little, the founders of contact improvisation and danced for the companies of Marie Chouinard, Jean-Pierre Perreault, Jo Lechay and Fulcrum. He was also a member of the improvisational ensembles Improvisational Movement Fund, Echo Case and Discovery Bal. Since 1980, his work has been taught and performed at numerous institutions and international festivals throughout North America and Europe as well as in Central and South America, Mexico, Australia, Eastern Europe, Israel and Russia. He is the recipient of the Canada Council’s Jacqueline-Lemieux award for the year 2000.