For the third consecutive year, Dance Ireland and Dublin Circus Project have partnered to provide on two residency opportunities:

Catalyst and Ignition. Both programmes are an investment from Dance Ireland and Dublin Circus Project in risk and exploration, with the support of the Arts Council.

Catalyst and Ignition are a series of enhanced, fully resourced, residency to support the development of work and skills.
In addition to bespoke advice, artists are provided with support and consultation by Dublin Circus Project and Dance Ireland. 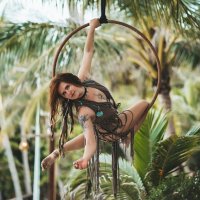 Polina Shapkina is a Russian born, Dublin reared aerialist and contemporary circus artist. Since 2016 she has been creating circus art and performing on stages across Ireland and more recently India and Thailand. She works passionately and consistently on solo work as well as generating larger shows under the name "Erebidae" - the circus theatre group and love child of herself and storyteller and circus artist Aoife Kavangh. She enjoys looking at themes of selfhood, ego, identity and archetypes and is ambitious in the pursuit of sharing her work with others to the best of her ability.

Jenny Tufts currently specialises in aerial hoop, but has never met a circus discipline she didn't like! In addition to proficiency across a wide range of aerial disciplines, she has also trained with industry leaders in contortion, handbalance, partner acrobatics, fire manipulation, and a dizzying number of other prop-based movement arts. Having called New York, London, Madrid, Melbourne, Berlin, and now Ireland home, she draws from a diverse range of interdisciplinary movement traditions. She also holds a B.A. in political science from NYU, and is a self-taught master dog cuddler. 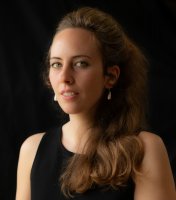 Nora Kelly Lester is a multidisciplinary artist, performer and theatre maker from Dublin. She was previously director in residence at The New Theatre, from 2015 – 2016. In 2018, Nora was awarded with an Arts Council Travel and Training Award to train in North American Clown Theatre with internationally acclaimed clown expert Sue Morrison. Since then has discovered a great passion for clown theatre. This year she was awarded with an Arts Council Theatre Bursary Award to develop and advance her artistic practice and vision as a theatre-maker by interrogating the fusion of clown and contemporary theatre. She was also awarded with a Creative Ireland Bursary from Dún Laoghaire-Rathdown County Council in support of the development of craft in the area of clown theatre performance. As an artist she is currently exploring ideas that challenge audiences’ perceptions of female identity in playful, funny and provocative ways.

Caitríona Ní Threasaigh and Angelica Santander are the new pair of clowns in town, both of whom completed the “Clown Through Mask” training with Sue Morrison. They met in April 2019 at the “Joey and Auguste” clown workshop run by Sue Morrison where they had the opportunity to work together on several

occasions. The complicity between them was instantaneous. They met again in the summer of the same year in a series of workshops directed by Carol Walsh. Although they did not know it at the time, something was beginning to cook, the spectacle of questions.

Although they are from different parts of the world, speak different languages and live in opposite parts of Dublin, they complement each other and share the curiosity of the one who knows nothing, the desire to know everything and the desire to burst out laughing.

Emmen Donnelly is a consummate aerial performer and credited circus mentor. His diverse practises strike a balance between the understanding of physicality & an unabashed sense of whimsy, layered with the experienced handling of his technique. His work takes a confident creative stride towards exploring new methodology with aerial and acrobatics, unashamed of his fierce playfulness and untamed in his  curiosity.  Emmen cuts an impressive physical presence on stage, and is highly respected for the use of his studious and personable creative skills.