Dance Ireland is pleased to announce Gwen Van Spÿk as our Producer in Residence.
This iniative comes at a timely moment for the dance sector, and our Members, as we work collectively to recover from the impact of Covid-19, future proof and evolve our practice.

Gwen will be leading on a series of workshops, exchanges and support sessions for the dance sector in dialogue with Dance Ireland, taking place in Autumn 2020.

This new programme strand will explore producing culture within the dance ecology in Ireland while connecting dance artists and producers, and provide opportunities to develop skills in practical aspects of self-producing for artists.

I'm delighted to be working with Dance Ireland on this new initiative. As the sector as a whole is adapting to the 'new normal' operating context and the challenges that that presents, it's timely and exciting to be reflecting upon and shining a light on the Producing role.

As well as a context for sharing knowledge and information, this is a wonderful opportunity for all those who will take part in the programme to reflect upon and consider what exactly Producing Dance involves, who Producers are and can be, and the value of Producers in the dance ecology.

Whether we are talking about Artists who are self producing and/or those working with dedicated Producers, the producing role is vital in transforming ideas into reality; if the sector is to realise its full potential and evolve and adapt effectively, the Producing role is one that needs support in tandem with the investment in the work of Artists and Creatives.
The Producer in Residence role is a key step forward in recognising this need and sits well alongside other conversations that are seeking to strengthen the sector as a whole.'
- Gwen Van Spÿk'

Details on the full programme to be announced the week of 28 September. 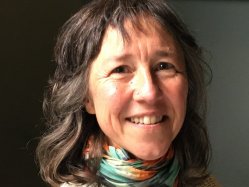 Gwen is a Producer, Consultant and Mentor working across the full breadth of the live performance sector. After working in the commercial sector in the USA and UK, Gwen moved into arts management. She was Administrative Director for Motionhouse Dance Theatre 1992 - 1997 after which she embarked on a career as an independent working with artists including: Russell Maliphant, Carol Brown, Rosemary Butcher, Nigel Charnock and New Art Club as their manager and project and/or tour producer

Currently Gwen has an ongoing role as Executive Director of Lone Twin for whom she produced The Boat Project, one of the highlights of the 2012 Cultural Olympiad, and as Producer for Visual Artist and Performance Maker Hetain Patel. Since moving to Ireland, in 2018 Gwen has been producing work for a portfolio of Irish artists and companies that includes Junk Ensemble, Croi Glan, Luke Murphy/Attic Projects, Pan Pan, One Two One Two and Dylan Tighe.

Alongside ongoing commitments Gwen has produced one-off projects including: Where The Land Meets the Sea, a Big Dance 2006 project performed by a cast of a 100 on Brighton beach; Destino, a co-production between Dance United and Sadler’s Wells for a cross generational cast of 130 performers with live music from the Royal Philharmonic Orchestra; a large-scale dance programme for the Rugby League World Cup 2013 including a performance by a cast of 500 for the Opening Ceremony at Millennium Stadium, Cardiff; and The Alchemy Project - a pioneering Dance and Mental Health intervention produced in collaboration with Dance United Yorkshire and South London and Maudsley NHS Trust in 2015.

To complement her work as a producer Gwen has undertaken consultancy projects for organizations and institutions such as Dance Manchester, Marketing Gloucester, Arts Council England, Arts Council of Wales and South East Dance; Gwen has also  fulfilled advisory strategic and business development briefs for Company Chameleon, Wired Aerial Theatre and Yorke Dance Project; delivered training in arts management; and lectured on cultural policy and management at the Universities of Falmouth, Surrey and Coventry.